The IHT is running the first article I’ve seen from a mainstream news source which doubts the percieved demographic crisis in Europe. It’s not a particularly well argued case, with little in the way of figures to back up the arguments, but it does at least tackle the issue. It also talks about the false linking of demographic with cultural decline, which I’ve written about previously.

While the current birth rate in Europe (and as I’ve pointed out before, almost all OECD countries) will lead to significant population reduction if they are maintained, that’s a fairly large if. Take for example Spain, which according to these figures, had a fertility rate of 1.2 in 1996. Going back just 16 years to 1980 the fertility rate was 2.2, a fairly huge change over the matter of a decade and a half.

Given such historical changes in fertility rates it seems rater premature to make dire predictions regarding the future population of Europe come the end of the century.

(Thanks to Europundit for the IHT link).

Posted in Uncategorized | Comments Off on Doubting the demographics

I’m currently adding plugin support to PubTal, thanks to some feedback from Andrew Dalke. This means that I can add support for textile very easily using an optional plugin (although it’ll need at least Python 2.2 because that’s what is required by PyTextile). This will also allow people to develop their own plugins to add support for custom content while still working within the PubTal framework.

Another feature that I’m working on will allow Catalogues to treat their entries as content, which is rater hard to explain without an example. The feature will allow PubTal to generate a table of contents page as well as easily managable previous/next buttons for each sub-page.

Another feature being thought about would allow plugins to add extra context to existing content types, which will add a lot of extra flexibility. Hopefully I can do all this without making PubTal even harder to explain than it already is…

Posted in Uncategorized | Comments Off on PubTal plugins

Toronto is a city of many different neighbourhoods. If you want to buy computer parts then you go to Spadina and College, if you want Greek food you go to the Danforth. Today I went with Becky for an exploration of Little India and the Distillery District. 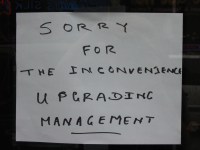 We used to live fairly closely to Little India, but despite its proximity we had only visited a few times, and then only to visit one or two of its restaurants in the evening. This time it was a Sunday afternoon on a long weekend (long live Civic holidays!) when almost all of the shops were open. I picked up a garlic chutney that I’ve not seen in ages, and had an excellent snack/lunch from one of the outdoor vendors. It was during our wandering that I spotted this amusing sign in the window of a closed shop.

The Distillary District is a recently renovated area filled with art galleries, restaurants, and several outdoor stages. We plan to go back because we didn’t really have much time to look around, and there is easily a full days worth of things to see. The most impressive has to be the Sandra Ainsley Gallery which exhibits a collection of amazing glass work.

Posted in Uncategorized | Comments Off on Exploring Toronto

I’ve had some thoughtful feedback regarding my previous posts on the war in Iraq. It made me realise that I’ve not written about the question of whether the intelligence used to justify the war was manufactured or altered for political reasons.

In my opinion the answer is certainly “no”. Too many people are involved, and the stakes are so high, that manufacturing or distortion of intelligence evidence is not a credible accusation. What I do think happened was that the government (or parts of it) decided to go to war, and then utilised the available evidence to justify the action. It is in this context that I make the assertion that the PM mislead the houses of parliament and the country.

The impression that many MPs were under, and which was perpetuated through the country’s media, was that Iraq posed the most serious threat to the national security of the UK. Intelligence evidence, suggesting that Iraq was trying to gain capabilities that would allow it to be a threat, existed but as the weapons inspectors demonstrated, there was little or no evidence that Iraq had made any progress in achieving this aim since the end of the last gulf war.

It’s my belief that the PM lead the country to war for strategic and political reasons. However, even if you believe he genuinely perceived Iraq to be such a serious threat, it is obvious by now that he was wrong: Iraq was not a serious threat at all. The weapons inspectors should have been allowed to finish their job (showing that no WMD existed), and we should not have gone to war on the basis of the threat that Iraq posed to the UK. An argument can be made that we were right to invade Iraq for humanitarian reasons, but this was not the argument that the PM promoted.

Either the PM mislead the country, or he was wrong. In either case we waged war on another country because of his actions, and he should be held accountable.

Posted in Uncategorized | Comments Off on A clarification