The last few weeks have been full of the tribulations of moving. In the end I saw a few more places before choosing somewhere, opting for a place in Limehouse. Since then I’ve been setting the flat up: getting food, phone, broadband (yay!), a wireless modem/router and lots of other bits-and-bobs that you need to live comfortably. Despite being fully furnished there has been an endless list of things for me to procure, ranging from wooden spoons to a pad of paper by the phone.

Now that I’ve got a good Internet connection again I’m hoping to clear my backlog of email and dedicate more time to keeping in touch with people. If anyone reading this is interested in meeting up in London let me know – my evening and weekends are going to be mostly free.

I’m not sure what to do in order to get a better way of judging colour in my photographs. The laptop screen is so different from sRGB that I know I’m not seeing my pictures as they should be seen. I’m reluctant to buy a CRT monitor though as it rather defeats the point of having a nice portable laptop! For now I’ll just have to take the opportunity to view pictures at work to ensure that the colours aren’t too far off.

Photo: Laundry left to dry in Venice (in the middle of winter!).

Posted in Uncategorized | Comments Off on Living in London 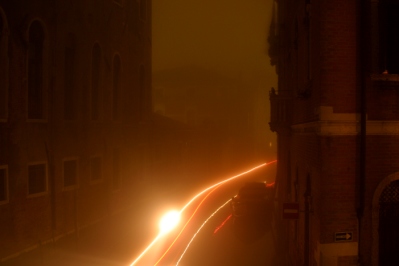