Wildlife Photographer of the Year

On Saturday we went to see the Wildlife Photographer of the Year 2004 exhibition at The Natural History Museum. The photos themselves are, as you would expect, of a very high standard indeed. While a very small number had faults that I found visually annoying, the rest were of the level of quality that I would love my photos to one day reach. 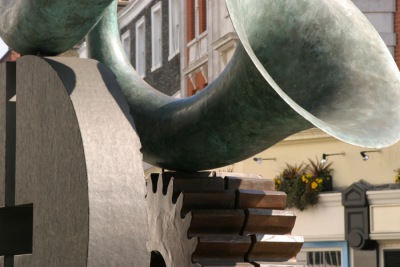 Of the several photos that stuck in my mind I think my favourite is the “Bald eagles in mid-winter” by Klaus Nigge. The image on the competitions website doesn’t do the photo justice of course, but close examination does bring out the feel of the picture. Unlike most of the other entries in the category of Animals in Their Environment, this picture gives the environment the larger visual impact. The combination of snow, blue-grey seas, dark rocks and close horizon bring a real sense of cold and isolation. It’s only after this sense has been set that the birds themselves become interesting.

One disappointment with the exhibition is the quality of the curating. The room needed to be much larger for the number of pictures that were being shown. Photos were back-lit, an excellent way to show them, but facing one another. As a result you could rarely see the whole photo without the interference of a reflection from the picture on the opposite wall, and some pictures couldn’t be seen at all. In addition one of the light units had failed; staff had enough time to print out a specially labelled apology, but not actually change the light bulb. Finally the room was slightly over heated from the large number of visitors shuffling from picture to picture.

The photo is part of a sculpture between South Kensington tube station and The Natural History Museum.

Posted in Uncategorized | Comments Off on Wildlife Photographer of the Year

Shorthand markup languages, which are intended to make writing HTML easier, are very popular. At least they are popular if you measure popularity by the sheer number of them available. Personally I think they are a poor solution to the problem for making the authoring of HTML easy.

Markup languages are mainly popular because programmers are lazy, and creating a graphical interface for editing HTML is difficult. Web browsers supply a built in “rich text editor” that allows simple HTML to be authored, but the subset of HTML that they provide authoring for, is usually different to the subset that the user would like to use. For example most of the rich text editors let you change the colour of the text, but not the title of a hyper-link.

I recently stumbled across the Markdown markup language. It seems to strike the right balance between useful facilities (such as automatic escaping of HTML) and obscure hard to remember syntax (such as that used by Textile).

There is an initial Python implementation of Markdown, and I’ve written a plugin for PubTal so I can use it. I don’t think it’s yet ready for real use because the Python Markdown library isn’t finished and has some strange debug code left in. Once the Markdown library is up to quality I’ll probably ship the plugin with PubTal.

On the SimpleTAL front there is an ongoing effort to add I18N support. I’m not entirely sure I like the specification for I18N support in TAL. It seems to be trying to solve too large a problem, and consequently gets it wrong. Unless I can come up with a better workable alternative however, the implementation of I18N is probably the best way of supporting multiple language use in a single SimpleTAL template.

Posted in Uncategorized | Comments Off on Markup