Recently I’ve not given myself enough time for journal updates, managing at best only weekly posts. I hope that this will change shortly, but sometimes, like now, I can think of nothing interesting to say that the world doesn’t already know. In lieu of real news, insight or opinion this post will consist of nothing more than odds and ends. 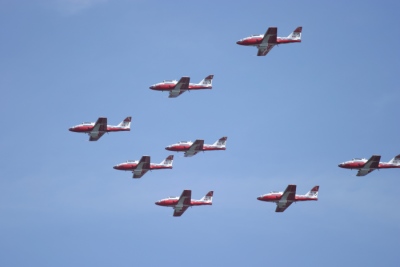 Over the long weekend the annual air show was held here in Toronto. Usually we get a reasonable view of the show from our deck, but the visibility was pretty poor this year until the end of the final show on Monday. When the Snowbirds had finished their various tricks they flew right past our deck, allowing me to take one of the best pictures of that afternoon.

Over the last week I’ve been hacking together a small image database application to capture information about scans of images. The requirements are specialised enough that using an existing image database wouldn’t work too well, so I’m putting something together using SQLObject, MySQL (yuck), ModPython, and SimpleTAL.

SQLObject is working out very well, and SimpleTAL is at this point pretty much bug free. ModPython on the other hand is a great idea, but is currently full of bugs. Defects found so far include: Old versions of modules being used (despite the PythonAutoReload directive), name-space problems when two modules with the same name are in different directories, and the Session implementation always timing out (use session.__accessed = time.time() after session.load() as a work around).

While ModPython will suffice for my uses I would avoid it for critical development at this point (version 3.1.3).

Posted in Uncategorized | Comments Off on Another week