Many of the EU15 member states are struggling to come to terms with the possible accession of Turkey. Even supporters of Turkish membership, such as France, seem intent on making it difficult.

The European Commission’s new stance that negotiations with candidate countries will be suspended if those countries fail to meet membership criteria is to be welcomed. The 100% success rate of countries negotiating membership during the recent expansion could easily be interpreted as meaning that there is little chance of rejection. By explaining the consequences of failing to meet membership criteria the commission increases the impetus for countries to reform. Hopefully this new approach will be applied as equally to Turkey as it is to Romania, Bulgaria and Croatia. 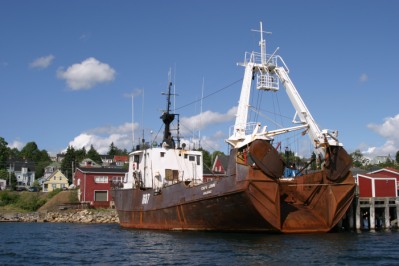 The new enlargement commissioner, Olli Rehn, is reported as wanting to introduce a permanent mechanism to limit the free flow of workers from Turkey to other EU states. This is a badly thought out proposal that has been rightly shot down by Turkey. A permanent mechanism to limit movement between Turkey and the rest of the EU would distort the single market and devalue membership of the EU significantly.

Being an EU citizen grants you the right to move freely between member states. If countries gained the right to limit immigration from other member states it would damage the single market. Currently British citizens can be sure that their rights will be respected when buying a house or starting a business in France. If member states can arbitrarily restrict immigration then that certainty is removed, and people are far less likely to make investments abroad.

(The picture is of a rusty trawler docked at Lunenburg)

Posted in Uncategorized | Comments Off on Turkey