Today I booked tickets for a week-long visit to Toronto. It’ll be one of the more peculiar trips I’ve taken; visiting an old home that still houses most of my possessions, a city that I know and friends that I’ve left behind. The trip is scheduled for 22nd April, a good couple of months away yet. 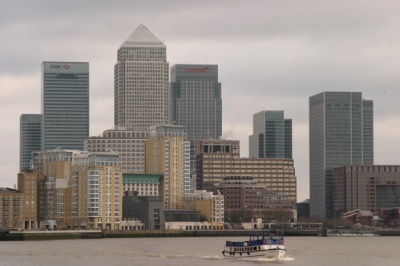 Last weekend was mostly a lazy one. On Friday I met up with Easter Bunny, Aca and Haggis The Second for dinner at a small restaurant called Pierino’s. On Saturday I had intended to get up early and catch the sun, instead I got up late, perfectly timed for the skies to have clouded over.

Sunday was also rather cloudy, but I decided to go for a walk along the river anyway. I can’t say much for the pictures, but it was definitely good to get out the camera again. The move over here has kept me busy enough the past two months that I’ve not really had the chance to get out and take photos. Hopefully a bit more effort on my part will take me out into London this weekend for more photography.

Another goal is to head out to enjoy some live music. It was only occasionally that we would go to see live music in Toronto, at the excellent Hugh’s Room and the Dora Keogh, but it’s something I’d like to do more of.

Canary Wharf, and the docklands in general, is a peculiar part of London. On the one hand they look like any typical North American city, full of sharp angles, glass and brushed metal. Yet it’s an area of London that certainly isn’t typical, more like a city within a city.

Posted in Uncategorized | Comments Off on Trips and pics